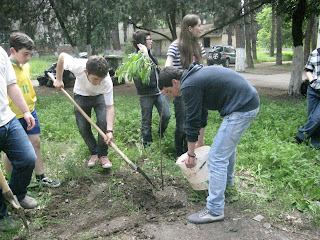 On the 20th May 2011 members of ENO club from organization SIQA, Georgia, Rustavi, have been involved in ENO Tree planting Day. They planted 2 cherry tree in the school garden Of Rustavi 12th public school.
Tree planting activity was preceded by students presentations about "Take care of nature, protect from pollution", than they cleaned up the school yard.
Posted by SIQA at 12:04 PM No comments:

The day of Biodiversity

Our ENO club has joined activities of Biodiversity day. A tree planting has been organised in the yard of Rustavi 20th public school. 13 trees were planted in total with the participation of ENO club members as well as the pupils of mentioned school. Tree planting activity was preceded by little seminar about ecological problems that occur nowadays.
Posted by Joseph at 10:06 AM No comments:

Another ecological activity has been organised by members of ENO club. On the 11th of april a sport event, named "big game" has been held. Participants of the activity were civilions of Rustavi, that created 4 groups, 8 people in each and challenged each-other. The game included sporting as well as ecological activities like cleaning nature, writing poems on environmental basis, answering ecological questions etc. The activity has been evaluated as effective as it raised ecological awareness of young population of city Rustavi and made it jolly to care about nature.
Posted by eto paichadze at 11:57 AM No comments: 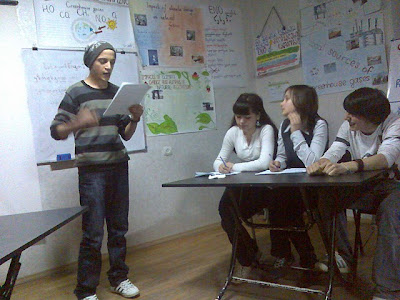 On the 13th of March 2010, ENO club organized political debates about the topic: The government should take care of ecological problems in the country. Two opposite groups, formed by members of ENO and Debate clubs from organization SIQA tried to create solution of existing problem via discussions. After debates audience, than attended debates expressed their opinions about the topic and made several suggestions about collaboration in order to overcome ecological obstacles.
Posted by SIQA at 10:26 AM No comments:

Members of ENO club have planned and performed a play named " The ant and the flea" (remake about globatl worming) for local youngsters in order to rise their awareness in ecological problems.
Posted by SIQA at 1:26 PM No comments:

ENO club in organization SIQA was engaged in "World water monitoring day" activity. Using special test kits that were sent by world wide coordinators of the program, pupils made several experiments on local sources of water. Results of the surveys were demonstrated to project coordinators and partners from other participant countries.
World Water Monitoring Day
View more presentations from etoelo.
Posted by eto paichadze at 12:46 PM No comments:

Members of ENO club In organization SIQA, Georgia, Rustavi have joined world wide activity "march of frogs". About 130 pledges were gathered from local population about the reduction of global worming.

Posted by eto paichadze at 11:03 AM No comments:

Members of ENO club regularly have been involved in ENO theme. During Nov 2009 - Jan 2010 ENO’s main theme was “Climate Change”. Within this theme, youngsters have studies climate change and its mechanism, local and global impacts, ways how to control climate change personally. Members found more information about global warming by internet and made slide-show.
Global Warming
View more presentations from etoelo.
Posted by eto paichadze at 9:55 PM No comments:

Members of ENO club made presentation about the impact of climate change in the world.
Posted by eto paichadze at 11:15 AM No comments:

ENO club of organization SIQA – Georgian Association of Educational Initiatives - Georgia, Rustavi, has joined the day of Global Biodiversity and world-wide tree planting activity related to this day. Members of our club with the help of other volunteers of the organization have put into the ground 15 new plants, in the yard of Rustavi city Children care center. About 20 lonely children were involved in the activity and the day has become one of the happiest ones in their lives. After tree planting activity a little training was held for Care center children about ecology and global ecological problems. This way we tried to improve their eco awareness and create bases of love and need to take care of the nature in their minds.

The blog's visitors around the world